Below is a rate forecast for the remainder of 2018 my friend Dr. Jason Miller at Michigan State has developed.

It looks like rates dropped significantly in August 2018. Some of this drop could be attributed to the rush of imports beating the deadline for the first round of tariffs.

Dr. Miller noted, "The decline in August spot rates was really pronounced. I think the one piece that isn't receiving enough attention is that we saw imports skyrocket in June (something like 8.4% year-over-year gain in the ports of LA/Long Beach) as folks rushed to move in inventory from China prior to tariffs. August subsequently saw low imports from China (down 3.1% year-over-year). Not sure if we'll see another rush for the next round of tariffs. "

The next round of tariffs, which the US will begin applying to $200 billion dollars of Chinese imports starts September 24, 2018.

Using the forecast above, we can create compelling narratives for each:

1. Base Case - The trucking market doesn't feel the rush of imports until after Jan. 1 as products are distributed from the ports. This case also assumes the economy keeps chugging along.

2. Higher Rates - The trucking market does feel the rush of imports in Q4 driving up demand and rates.

3. Lower Rates - The trucking market doesn't feel the rush of imports and the economy loses steam.

I'm not sure which way rates will go to close out 2018, but if it's anything like the first nine months, then it should be one hell of a wild ride. 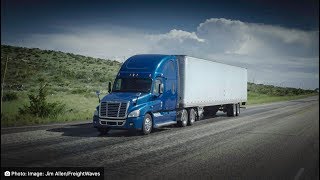